You know all those long-running family feuds? I'm thinking epic scale, Montagues & Capulets kind of deal? Forget them. The great trifle debate has been going on in my family for as long as I can remember. Nor is the debate restricted to family members. Last week, I was drawn into a discussion at work about how trifle "should" be made which became quite heated. In the end we agreed to all make our version of a proper trifle and the one English person in our office would judge the best one... he seemed quite happy about this.

The debate centers over where exactly the jelly goes in your recipe.  Members of "the other side" foolishly suggest that it should be poured over the sponge on the bottom and then set. People on "the correct side" agree that jelly in sponge is disgusting and the sponge should be soaked in sherry and/or peach juice and the jelly should be carefully set over the top of the custard. Some strange people suggest that there shouldn't be any jelly at all... that just doesn't even make sense!

So, here's the way to do trifle properly. I've added cream to the custard because it makes it yummy but it can also make the layering tricky if it doesn't set hard enough. If you're worried, you may want to leave the cream out of the custard.
If you want to get fancy, you can also put berries on the top of the custard before it sets. Then you can see them through the jelly. 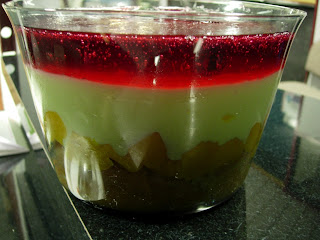 Cut the sponge into chunks and layer on the bottom of a glass bowl. Pour over the sherry and/or enough juice from the peaches to soak the sponge.

To make the custard: In a small bowl, combine the custard powder, sugar, egg and 1/2 a cup of milk to form a smooth paste. Heat the remaining 2 cups of milk in the microwave until boiling. Whisk in the custard powder mixture. Microwave in 1 minute intervals, stirring in between until custard boils & thickens. Allow to cool.

Once cooled, mix the cream into the custard and beat with an electric mixer for 1-2 minutes. Spread the custard over the sponge and refrigerate to set completely (at least 2 hours but the longer the better).

Make up the jelly according to the instructions on the packet (you may want to add a little more gelatine if you want firm jelly). Refrigerate until it reaches egg white consistency. Pour over the custard and hope like the dickens it stays on top. Refrigerate until completely set.
Posted by Running with scissors at 9:00:00 pm