How to make family discussions incomprehensible

Christmas in my family is one of the happy times of the year where I get to organise my family and write as many lists as I please. Usually this means telling my father and brother where to show up and what food to bring but for my mother it also usually means some intense discussions about exactly who's getting baked goodies, what kind and how much chocolate we needed to buy. Our conversations probably don't make a lot of sense to spectators because we tend to give our biscuits nicknames.

One of our most frequently used recipes is Bugs. What we mean is this recipe for Italian almond biscuits, not the creepy kind of bugs. Bugs are a beautiful but simple-tasting treat that are always popular and can be made ahead of time. They also look a bit like caterpillars which I thought was pretty tops as a kid. Everyone seems to love them and they are gluten-free.

The only bad thing about bugs is that they require a large star-shaped piping flute. I've never seen them in the shops and I'm pretty sure my mum's is about 30 years old. That being said, you could probably pick one up at a specialty cake-making store. Or you could use a large, smooth piping tube instead, I've seen those around. 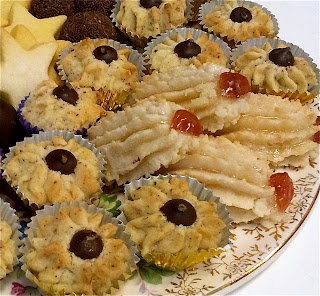 Combine the almonds ad icing sugar and then mix in egg whites until well combined. The mixture should be a firm paste but if you think it's too dry, add a teaspoon or so of water (not too much!).

Spoon the mixture into a strong fabric piping bag fitted with a large star piping nozzle and pipe 4cm caterpillars onto trays lined with baking paper. Push a little bit harder at the start to give each caterpillar a nice, fat bottom.

Push a piece of cherry firmly onto the end of each biscuit (so it looks like a head/nose).
Cover the biscuits loosely with foil and leave to dry out for at least 2 hours but preferably overnight.
Bake biscuits in oven at 180c for 8-10 minutes until just starting to turn golden.

For the glaze
Put gelatine, sugar and water in a small saucepan and stir while bringing to the boil. Reduce heat and simmer for 2 minutes, brushing down the sides of the pan.
Brush cool biscuits with glaze and allow to dry for a few hours.
Posted by Running with scissors at 9:21:00 pm