I'd like to be able to say that I had some sort of fabulous, life-changing goings on that meant I was temporarily unable to write posts... like I was stuck on a tiny island with no oven, only a basketball for company and had some sort of epiphany... unfortunately that's not really the case. I think it was much closer to a work-stress induced writer's block combined with a really ridiculous number of extra-curricular activities.

Mostly, I started this job where I had visions of showing people how wonderful policies really are, and then they would naturally get as much joy out of their correct application as I do. Call me naïve but this reality has not eventuated and the people I work with now don't seem to understand, leaving me a bit of a sad sack and not inclined to bake. Their loss I say.

Anyway, things are looking up. With almost no effort at all (beyond complaining, that is) I'll soon be shot of the job so all of a sudden, there's two batches of brownies on my bench. Before we get to those however, here's something I made for dinner with my Gran a little while ago. There are endless recipes for Chocolate Almond Tortes around but this one seemed to combine the good points of most of them - rich but somehow not too sweet and great for winter nights. Sorry about the dodgy picture, there were screaming kids in the vicinity. It was chocolatey and didn't ditch in the middle like some can. 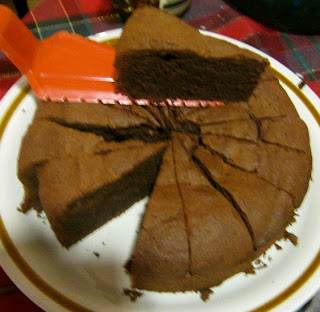 Melt the butter, chocolate and vanilla together, then stir in the coffee powder until it dissolves. Allow to cool to room temperature.

Separate the eggs making sure none of the yolk gets into the whites. Beat the egg whites and about half the sugar together until soft peaks form. Then in a separate bowl, beat the yolks and the rest of the sugar until thick and light in colour.

Carefully spread the mixture into the cake tin and bake for 40 minutes. Cover and allow to cool in the pan.
Posted by Running with scissors at 12:56:00 am