Recently, some people have made comments about my competitive nature in ways that made it sound like it was something I was aware of. Actually, this came as quite a surprise because I'd never considered myself a competitive person.

However, my entire reason for deciding I was not competitive was based on the idea that I don't like sports. But once these comments started, I realised that I might have this concept the wrong way around. I enjoy many physical activities but have have found that most don't like me. I am in no way aerodynamic and in the words of Hannah Gadsby "independent flesh is the enemy of speed". Because I am apparently competitive, if I can't win it, I'm not interested.

Upon further reflection, yes, you might be right. In fact I've actually "won" things that aren't, never have been, and never will be, competitions. My particular favourite is yoga. I love yoga because I'm super flexible. I can therefore win because I can bend further than you, get closer to my toes than you, look more like a pretzel than you, and generally be more awesome than you. I come away with a happy, glowing feeling that I suspect has less to do with reaching a zen state than your usual yogi.

For my birthday, some friends & I went to the coast. Our plan was to drink wine, watch DVDs and do some sedate bushwalking. The most satisfying part of this for me was when we walked along the rocky side of a bay, the perfect opportunity for winning. Since I was a kid, the goal of the competition has always been to travel across the rocks as fast as you can, as close to the sea as you can without either drowning or breaking a bone while everyone else walks along the path. Needless to say, I won. I still maintain that it doesn't matter if the other contestants actually know they're competing or not.

A side effect of this lovely weekend was that I ended up with a bag of uneaten cashews & cranberries after it turned out that our hikes were so sedate we didn't really need "supplies" beyond m&ms and an apple. So here is a fabulous way to get rid of your unwanted trail mix... Winning :) 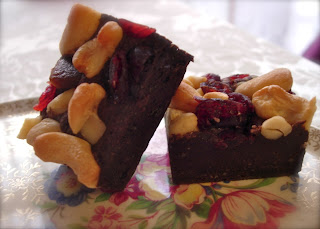 A note on these brownies, they are the only ones on here so far that don't have chocolate in them. I found that I wasn't too thrilled with them on the day they were made but after leaving them in a box overnight, they turned awesome.

Melt the butter, sugar and cocoa together and allow to cool.
Stir in the vanilla, then eggs one at a time, and then the flour. Mix until smooth but don't overdo it.
Spread cake mix in the baking pan and sprinkle with the cranberries and cashews, pressing them in lightly.
Bake for 30 minutes or until centre is slightly soft. Allow to cool in the pan.