Last year I made gingerbread men as Christmas presents for some of my friends. They were all decorated lovingly and put in gft bags. Unfortunately I overlooked the fact that where I live, it's really hot at Christmas time and things get a bit sticky. So by the time my friends opened their little gingerbread baggies, some of the men had formed inappropriate liaisons with each other.

Now perhaps for other people this would have been a less than optimal outcome but for my friends, it was probably better than just getting regular gingerbread men. The only real disappointment was mine, that they came out as hard biscuits rather than soft ones. I might be completely wrong but I've always felt like gingerbread should be almost chewy and definitely not hard... otherwise why would it be called bread?

So this year, I set out with two goals: to make softer, hopefully chewy gingerbread, and to make them completely inappropriate. My mum found me a good recipe from the Women's Weekly Kids Cookbook and it's turned out pretty well, they are definitely softer than last year. I think to make them chewier, you'd need to change the sugar/golden syrup ratio because I think something magical happens between the syrup and the bicarb to get chewy gingerbread. Next time I'll try 2/3 cup of golden syrup ad 1/4 brown sugar. I don't care if the maths of that doesn't make sense.

As for inappropriate... If you fold the arms of the person over before you bake them then they can portray a great many emotions with the right embellishments. However, you need to be a better artist  han me to do the details. So instead I went for the standard kind then mixed up a few to be reindeer, which had my flatmate confused for quite a while. 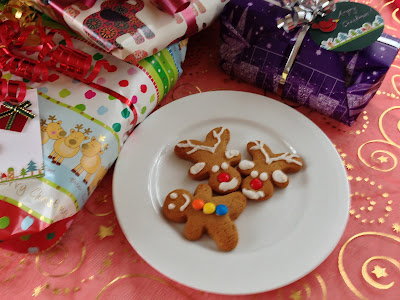 To decorate
1 small packet of mini m&ms, or currants
Icing mixture (I used store bought writing icing because it has a good consistency)

Melt the butter, sugar, and golden syrup together in a large bowl for 1 minute in the microwave. Stir to combine and then allow mixture to cool.

Sift flour, spices, and bicarb soda into butter mixture, then add the egg and vanilla. Stir until combined.

Knead dough lightly on floured board until it is solid enough to roll out. (I had to refrigerate mine for 10 minutes and add some extra flour because it was a hot day).

Roll out to 5mm thick between two sheets of baking paper to avoid sticking, then cut out in desired shapes. Press on m&ms or currants before cooking, then bake for 10 minutes or until golden brown. Cool on trays before icing.