So last week I decided that a gluten-free fruit cake would be an awesome idea. I still maintain that the idea is awesome, just the execution was slightly less than breathtaking. It turns out that gluten-free fruit cake is really hard to make for reasons I haven't quite figured out yet. I managed to make one which was both stodgy and dry which I think is quite an achievement.

Anyway, to satisfy my craving for moist, alcoholic, fruitiness, I decided to give a rum and raisin brownie a try. Unfortunately, the recipes I found didn't really feel quite right. I wanted a heavy & dense brownie with plenty of drunk fruit so I made one up... here it is. 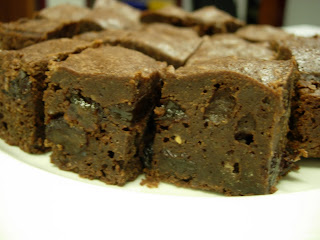 
20 cm square pan lined with baking paper                       Oven @ 160c
Soak the raisins in the rum for three hours (or microwave them a little so they absorb the rum).
Melt the chocolate and butter together then allow to cool slightly. Mix in the rum and raisin mixture, then the vanilla, sugar, eggs and sour cream and stir until well combined.
Fold in the cocoa powder and the flour.
Bake for 35 mins. Stand in pan for 10 mins before turning out.
Posted by Running with scissors at 10:40:00 pm